The woodworker’s pride and joy 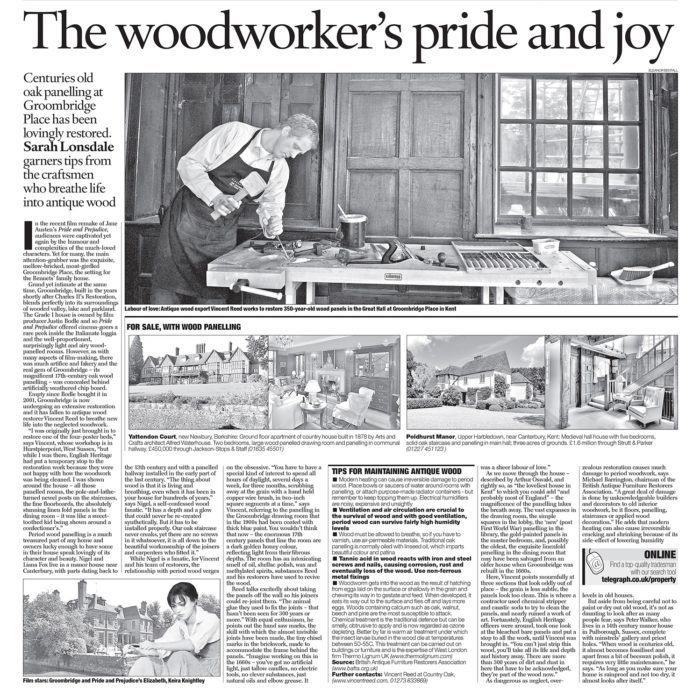 In the recent film remake of Jane Austen’s Pride and Prejudice, audiences we captivated yet again by the humour and complexities fo the much-loved characters. Yet for many, the main attention-grabber was the exquisite, mellow-bricked, moat-girdled Groombridge Place, the setting for the Bennets’ family home.

Grand yet intimate at the same time, Groombridge, built in the years shortly after Charles II’s Restoration, blends perfectly into its surroundings of wooded valley, lake and parkland. The Grade I house is owned by film producer Justin Bodle and so Pride and Prejudice offered cinema-goers a rare peek inside the Italianate loggia and the well-proportioned, surprisingly light and airy wood-panelled rooms. However, as with many aspects of the film-making, there was much artifice and fakery and the real gem of Groombridge – its magnificent 17th Century oak wood panelling – was concealed behind artificially weathered chip board.

Empty since Bodle bought it in 2001, Groombridge is now undergoing an extensive restoration and it has fallen to antique wood restorer Vincent Reed to breathe new life into the neglected woodwork.

“I was originally just brought in to restore one of the four-poster beds,” says Vincent, whose workshop is in Hurstpierpont, West Sussex, “but while I was there, English Heritage had put a temporary stop to the restoration work because they were not happy with how the woodwork was being cleaned. I was shown around the house – all those panelled rooms, the pole-and-lathe-turned newel posts on the staircases, the fine floorboards, the absolutely stunning linen fold panels in the dining room – it was like a sweet-toothed kid being shown around a confectioner’s”

Period wood panelling is a much treasured part of any home and owners lucky enough to have some in their house speak lovingly of its character and beauty. Nigel and Liana Fox live in a manor house near Canterbury, with parts dating back to the 13th century and with a panelled hallway installed in the early part of the last century. ‘The thing about wood is that it is living and breathing, even when it has been in your house for hundreds of years.” says Nigel, a self-confessed wood fanatic. ‘It has a depth and a glow that could never be re-created synthetically. But it has to be installed properly. Our oak staircase never creaks, yet there are no screws in it whatsoever, it is all down to the beautiful workmanship of the joiners and carpenters who fitted it.”

While Nigel is a fanatic, for Vincent and his team of restorers, the relationship with period wood verges on the obsessive. “You have to have a special kind of interest to spend all hours of daylight, several days a week, for three months, scrubbing away at the grain with a hand held copper wire brush, in two-inch square segments at a time.” says Vincent, referring to the panelling in the Groombridge drawing room that in the 1900s had been coated with thick blue paint. You wouldn’t think that now – the enormous 17th century panels that line the room are a golden honey colour, reflecting light from their fibrous depths. The room has an intoxicating smell of oil, shellac polish, wax and methylated spirits, substances Reed and his restorers have used to revive the wood.

Reed talks excitedly about taking the panels off the wall so his joiners could re-joint them. “The anima glue they used to fix the joints – that hasn’t been seen for 300 years or more.” With equal enthusiasm, he points out the hand saw marks, the skill with which the almost invisible joints have been made, the tiny chisel marks in the brickwork, made to accommodate the frame behind the panels. “Imagine working on this in the 1660s – you’ve got no artificial light, just tallow candles, no electric tools, no clever substances, just natural oils and elbow grease. It was a sheer labour of love.”

As we move through the house – described by Arthur Oswald, and rightly so, as “the loveliest house in Kent” to which you could add “and probably most of England” – the magnificence of the panelling takes the breath away. The vast expanses in the drawing room, the simple squares in the lobby, the ‘new’ (post First World War) panelling in the library, the gold-painted panels in the master bedroom, and, possibly the oldest, the exquisite linenfold panelling in the dining room that may have been salvaged from an older house when Groombridge was rebuilt in the 1660s.

Here, Vincent points mournfully at three sections that look oddly out of place – the grain is less subtle, the panels look too clean. This is where a contractor used chemical stripper and caustic soda to try to clean the panels, and nearly ruined a work of art. Fortunately, English Heritage officers were around, took one look at the bleached bare panels and put a stop to all the work, until Vincent was brought in. “You can’t just strip this wood, you’ll take all its life and depth and history away. There are more than 300 years of dirt and dust in here that have to be acknowledged, they’re part of the wood now.”

As dangerous as neglect, overzealous restoration causes much damage to period woodwork, says Michael Barrington, chairman of the British Antique Furniture Restorers Association. “A great deal of damage is done by unknowledgeable builders and decorators to old interior woodwork, be it floors, panelling, staircases or applied wood decoration.” He adds that modern heating can also cause irreversible cracking and shrinking because of its side-effect of lowering humidity levels in old houses.

But aside from being careful not to paint or dry out old wood, it’s not as daunting to look after as many people fear, says Peter Walker, who lives in a 14th century manor house in Pullborough, Sussex, complete with minstrels’ gallery and priest holes. “When wood is centuries old, it almost becomes fossilised and apart from a bit of beeswax polish, it requires very little maintenance.” he says. “As long as you make sure your home is rainproof and not too dry, it almost looks after itself.”

• Modern heating can cause irreversible damage to period wood. Place bowls or saucers of water around rooms with panelling, or attach purpose-made radiator containers – but remember to keep topping them up. Electrical humidifiers are noisy, expensive and unsightly.

• Ventilation and air circulation are crucial to the survival of wood and with good ventilation, period wood can survive fairly high humidity levels.

• Wood must be allowed to breathe, so if you have to varnish, use air-peramable materials. Traditional oak panelling is normally oiled with linseed oil, which imparts beautiful colour and patina.

• Tannic acid in wood reacts with iron and steel screws and nails, causing corrosion, rust and eventually loss of the wood. Use non-ferrous metal fittings.

• Woodworm gets into the wood as the result of hatching from eggs laid on the surface or shallowly in the grain and chewing its way in to gestate and feed. When developed, it eats its way out to the surface and flies off and lays more eggs. Woods containing calcium such as oak, walnut, beech and pine are the most susceptible to attack. Chemical treatment is the traditional defence but can be smelly, obtrusive to apply and is now regarded as ozone depleting. Better by far is warm air treatment under which the insect larvae buried in the wood die at temperatures between 50-56C. This treatment can be carried out on buildings or furniture and its the expertise of West London firm Thermo Lingum UK.

Categories: Panelling
Back to all press, media & blog articles