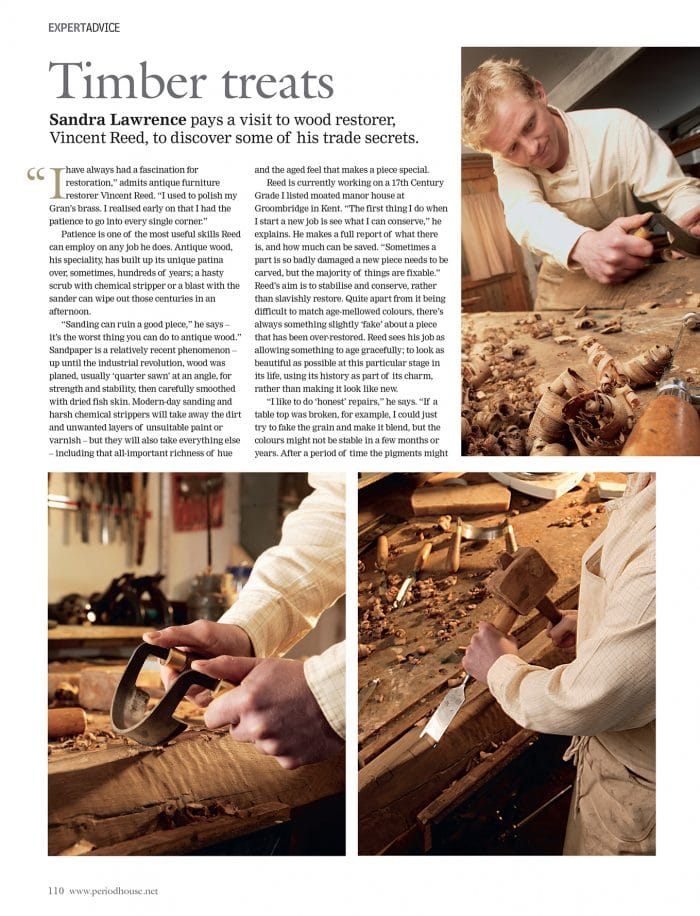 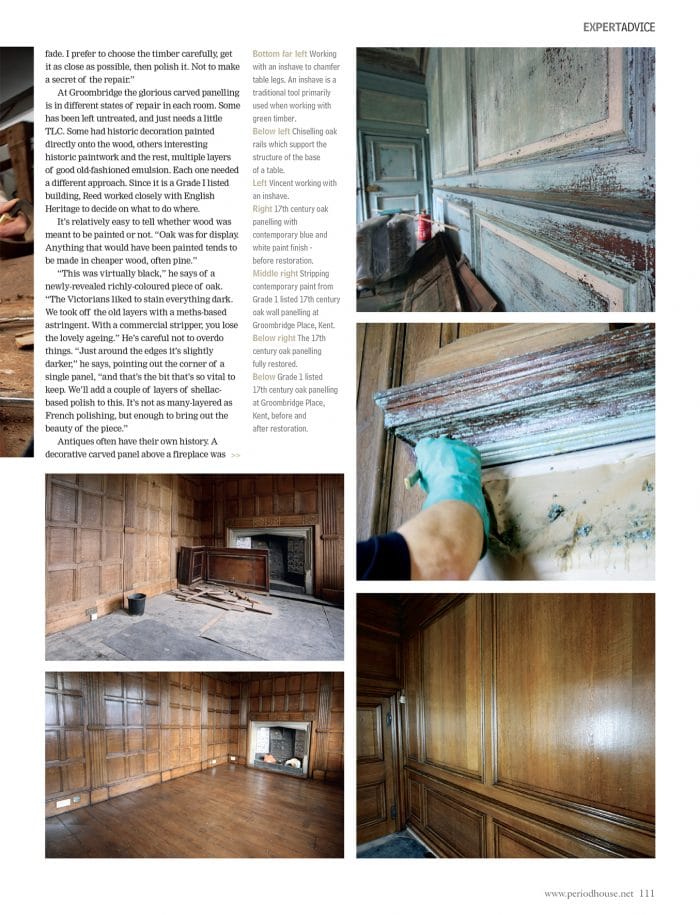 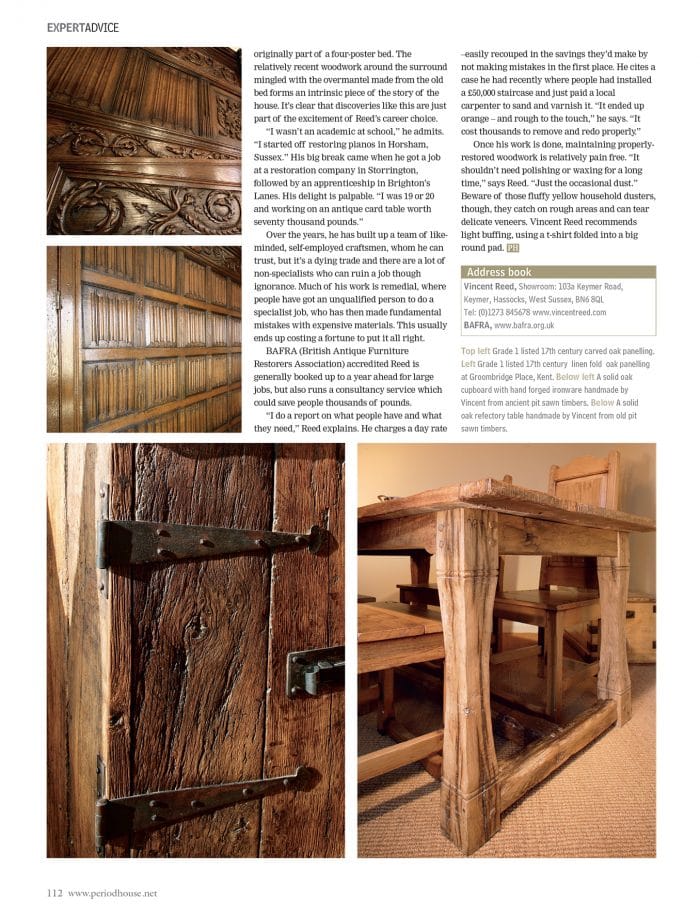 Sandra Lawrence pays a visit to wood restorer, Vincent Reed, to discover some of his trade secrets.

“I have always had a fascination for restoration,” admits antique furniture restorer Vincent Reed. “I used to polish my Gran’s brass. I realised early on that I had the patience to go into every single corner.”

Patience is one of the most useful skills Reed can employ on any job he does. Antique wood, his speciality, has built up its unique patina over, sometimes, hundreds of years; a hasty scrub with chemical stripper or a blast with the sander can wipe out those centuries in an afternoon.

“Sanding can ruin a good piece,” he says – it’s the worst thing you can do to antique wood.” Sandpaper is a relatively recent phenomenon – up until the industrial revolution, wood was planed, usually ‘quarter sawn’ at an angle, for strength and stability, then carefully smoothed with dried fish skin. Modern-day sanding and harsh chemical strippers will take away the dirt and unwanted layers of unsuitable paint or varnish – but they will also take everything else – including that all-important richness of hue and the aged feel that makes a piece special.

Reed is currently working on a 17th Century Grade I listed moated manor house at Groombridge in Kent. “The first thing I do when I start a new job is see what I can conserve,” he explains. He makes a full report of what there is, and how much can be saved. “Sometimes a part is so badly damaged a new piece needs to be carved, but the majority of things are fixable.” Reed’s aim is to stabilise and conserve, rather than slavishly restore. Quite apart from it being difficult to match age-mellowed colours, there’s always something slightly ‘fake’ about a piece that has been over-restored. Reed sees his job as allowing something to age gracefully; to look as beautiful as possible at this particular stage in its life, using its history as part of its charm, rather than making it look like new.

“I like to do ‘honest’ repairs,” he says. “If a table top was broken, for example, I could just try to fake the grain and make it blend, but the colours might not be stable in a few months or years. After a period of time the pigments might fade. I prefer to choose the timber carefully, get it as close as possible, then polish it. Not to make a secret of the repair.”

At Groombridge the glorious carved panelling is in different states of repair in each room. Some has been left untreated, and just needs a little TLC. Some had historic decoration painted directly onto the wood, others interesting historic paintwork and the rest, multiple layers of good old-fashioned emulsion. Each one needed a different approach. Since it is a Grade I listed building, Reed worked closely with English Heritage to decide on what to do where.
It’s relatively easy to tell whether wood was meant to be painted or not. “Oak was for display. Anything that would have been painted tends to be made in cheaper wood, often pine.” “This was virtually black,” he says of a newly-revealed richly-coloured piece of oak. “The Victorians liked to stain everything dark. We took off the old layers with a meths-based astringent. With a commercial stripper, you lose the lovely ageing.” He’s careful not to overdo things. “Just around the edges it’s slightly darker,” he says, pointing out the corner of a single panel, “and that’s the bit that’s so vital to keep. We’ll add a couple of layers of shellacbased polish to this. It’s not as many-layered as French polishing, but enough to bring out the beauty of the piece.”
Antiques often have their own history. A decorative carved panel above a fireplace was originally part of a four-poster bed. The relatively recent woodwork around the surround mingled with the overmantel made from the old bed forms an intrinsic piece of the story of the house. It’s clear that discoveries like this are just part of the excitement of Reed’s career choice. “I wasn’t an academic at school,” he admits. “I started off restoring pianos in Horsham, Sussex.” His big break came when he got a job at a restoration company in Storrington, followed by an apprenticeship in Brighton’s Lanes. His delight is palpable. “I was 19 or 20 and working on an antique card table worth seventy thousand pounds.”

Over the years, he has built up a team of likeminded, self-employed craftsmen, whom he can trust, but it’s a dying trade and there are a lot of non-specialists who can ruin a job though ignorance. Much of his work is remedial, where people have got an unqualified person to do a specialist job, who has then made fundamental mistakes with expensive materials. This usually ends up costing a fortune to put it all right.

BAFRA (British Antique Furniture Restorers Association) accredited Reed is generally booked up to a year ahead for large jobs, but also runs a consultancy service which could save people thousands of pounds. “I do a report on what people have and what they need,” Reed explains. He charges a day rate –easily recouped in the savings they’d make by not making mistakes in the first place. He cites a case he had recently where people had installed a £50,000 staircase and just paid a local carpenter to sand and varnish it. “It ended up orange – and rough to the touch,” he says. “It cost thousands to remove and redo properly.”

Once his work is done, maintaining properly restored woodwork is relatively pain free. “It shouldn’t need polishing or waxing for a long time,” says Reed. “Just the occasional dust.” Beware of those fluffy yellow household dusters, though, they catch on rough areas and can tear delicate veneers. Vincent Reed recommends light buffing, using a t-shirt folded into a big round pad.

Categories: Uncategorized
Back to all press, media & blog articles