Insight: Evolution of the Saw

Prior to the invention of the sawmill, boards were rived (split) and planed, or more often sawn by two men with a whipsaw, using saddle blocks to hold the log, and a saw pit for the pitman who worked below. Sawing was slow, and required strong and hearty men. The top-sawyer had to be the stronger of the two because the saw was pulled in turn by each man, and the lower had the advantage of gravity. The top-sawyer also had to guide the saw so that the board was of even thickness. This was often done by following a chalk-line. There is rumour that this is where the phrase top-dog vs. underdog originates from, the top dog being the more senior worker and the underdog was the junior worker in the saw-pit below. There is, however, no actual evidence that this is true, as literature from the time makes no mention of this phrase when referring to the saw-pits. 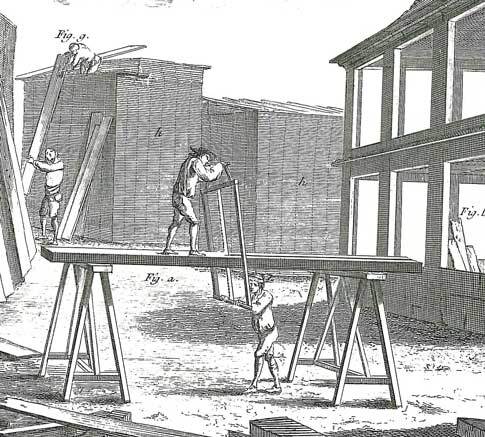 Early sawmills simply adapted the whipsaw to mechanical power, generally driven by a water wheel to speed up the process. The circular motion of the wheel was changed to back-and-forth motion of the saw blade by a connecting rod known as a pitman arm (thus introducing a term used in many mechanical applications).

One of the earlier known sawmills was near Augsburg in Germany.

Generally, only the saw was powered, and the logs had to be loaded and moved by hand. An early improvement was the development of a movable carriage, also water powered, to move the log steadily through the saw blade.

A type of sawmill without a crank is known from Germany called “knock and drop” or simply “drop” -mills. In these drop sawmills, the frame carrying the saw blade is knocked upwards by cams as the shaft turns. These cams are let into the shaft on which the waterwheel sits. When the frame carrying the saw blade is in the topmost position it drops by its own weight, making a loud knocking noise, and in so doing it cuts the trunk.” 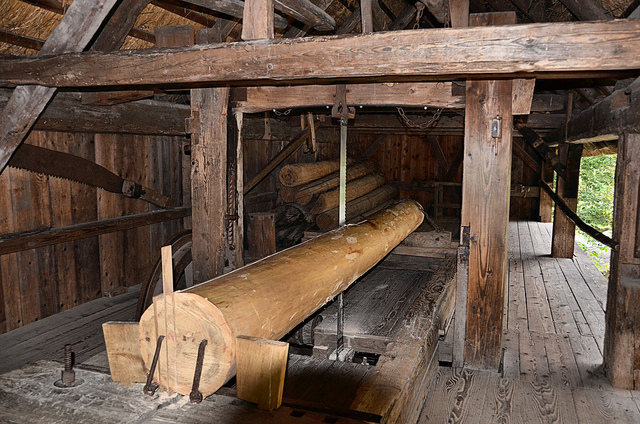 A small mill such as this would be the centre of many rural communities in wood-exporting regions such as the Baltic countries and Canada. The output of such mills would be quite low, perhaps only 500 boards per day. They would also generally only operate during the winter, the peak logging season.

At the end of the 16th century Cornelis Corneliszoon van Uitgeest invented the worlds first wind powered sawmill. This was a major innovation that made it much easier to saw planks and posts. Wind powered sawmills produced major productivity increases ,with hand sawing, 60 beams or trunks would take 120 working days, with wind power this only took 4 to 5 days. 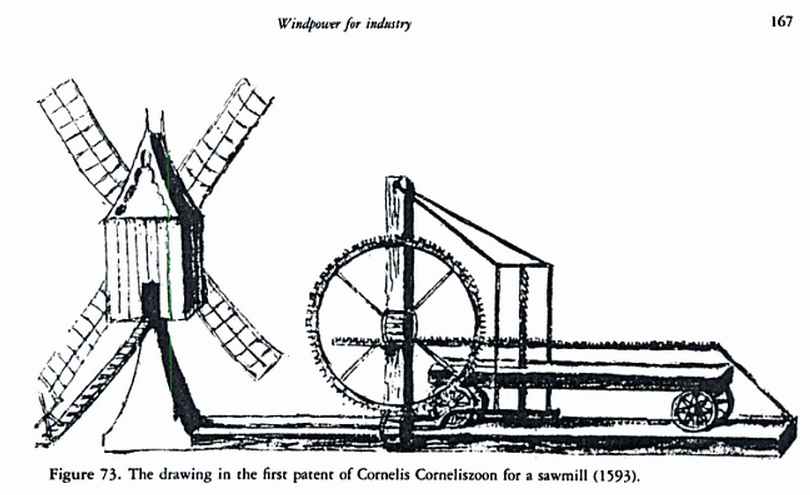 In the United States, the sawmill was introduced soon after the colonisation of Virginia by recruiting skilled men from Hamburg. Later the metal parts were obtained from the Netherlands, where the technology was far ahead of that in England, where the sawmill remained largely unknown until the late 18th century. The arrival of a sawmill was a large and stimulative step in the growth of a frontier community.